He’s at it again. Two weeks after he was vindicated for No Collusion, Trump began purging his Department of Homeland Security. The firing began when department head, Kirstjen Nielsen, was removed, and soon after the head of the Secret Service was let go. Nielsen has been in hot water since the Child Separation scandal came to light last summer. 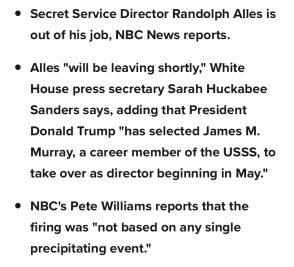 In the era of Trump, a lot of stories go overlooked, but the jaw dropping display of blatant corruption by the city’s Democrat Mayor should not be missed. Take a look at the laundry list of things she is on the hook for.

Take a look at one of the top headlines that took Twitter by storm this week. Trolls on the left vehemently despise Devin Nunes as does Twitter. He is suing the company for $250 million. It isn’t surprising that the following hashtag rose in popularity on Wednesday. 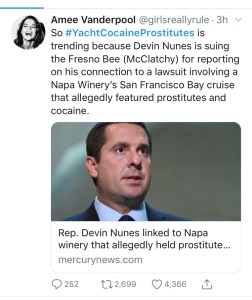 An Obama White House official was indicted by the Trump DOJ as Trump now goes on offense post Mueller Report.

Attorney General Barr has now said “spying did occur,” in what has been the line heard around D.C. this week. He is referring to the 2016 Trump campaign, and states he has evidence that folks in D.C. were using intel to survey his campaign. The matter is going to be investigated.

Felicity Huffman took a plea deal, but Lori Laughlin is ‘fighting on’. She stands to face 40 years in jail, and reports that trickled out this week are stunning. Apparently, she didn’t think jail was on the table, and she seems oblivious to the severity of her offenses. She is either receiving horrible counsel, or she is simply the most arrogant woman in Hollywood.

The first full length trailer of the remake debuted this week. The movie will have a fantastic run at the box office, but folks were quick the mention the film appears too real. In particular, Scar isn’t visually different enough, especially when compared with his brother Mufasa. Remember, the animated film had the luxury of incredibly unrealistic colors, whereas the real life movie does not. Something tells me ten-year-olds won’t care.

Disney debuted their own streaming platform this week. It comes out in November and starts at $6.99/month

Here is what the service offers:

The entire Disney vault of movies, from Snow White to Mulan, and everything in between, such as, Star Wars, Pixar, and Marvel

All the Disney Channel original series and movies, plus spin offs

Direct to platform Star Wars movies will debut on the service

This is a huge game changer in the space, and expect the service to be in any home with children within a few years. The business side of the aisle likely complements Netflix, as opposed to competing with it. The reason – parents will not go to bed watching Pinocchio, whereas, they’ll love putting Disney+ on in one room so the kids can watch Frozen for the 500th time, while they can watch true crime shows on Netflix.

Lyft went public one week ago, and the ride has been nearly as wild as your 3AM Lyft ride home from the club en route to McDonald’s. 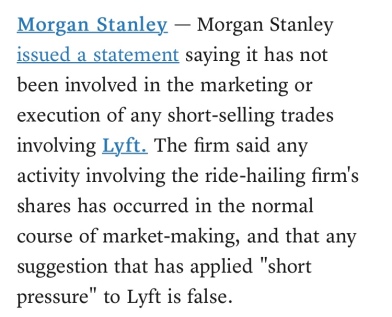 1 – Lyft is suing their underwriters, and accusing them of essentially not doing their jobs. Underwriters are supposed to be your company’s biggest advocate when they take your company public, and Lyft feels Morgan Stanley was acting to the contrary.

2 – The stock collapsed 15% on the week, is down 30% from their intra-day high when they went public two weeks ago, and they’re down 20% from their official IPO price of $82/share

Uber announced their IPO is quickly approaching, unlike the time you spend waiting for Mohammad to arrive in a Toyota Corolla. (4.5 Stars)

1 – The key takeaway this week from Uber is the company has no idea how to turn a profit, just like Lyft.

Uber and Lyft raised hell and rocketed to popularity by undercutting taxis for years. Now, both companies are soon to be slaves to good ol’ Wall Street. Wall Street doesn’t care about your 5-star rating, or wait time. Wall Street cares about your profits.

Oh, the times they are a changin’. Expect ride share costs to increase, and demand to slow. Taxis, public transit, as well as actually taking the car out on the weekend likely make comebacks as these companies evolve their business models to cater to Wall Street.

The Oracle of Omaha, and America’s most popular investor is the majority shareholder in America’s most hated bank. Buffett has remained eerily quiet on the scandal-ridden company for nearly two years, until this week. He expressed a need for the company to hire an external CEO, and especially avoid someone from Goldman Sachs.

Hopefully, this is something Wells Fargo and the industry will take seriously. Banking and finance has recovered since 2008, and ‘fin-tech’ has begun to take over. It is time for new blood in the industry, and Wells Fargo is the perfect landing pod to experiment with new, evolutionary ideas.

The news has finally begun to slow regarding the embattled jet maker. The week began with turbulence when Bank of America issued a serious downgrade of the company. The next four days brought new calm to a company that has experienced what seems to be a negative headline every day since the Ethiopian jet went down almost thirty days ago.

The Las Vegas casino company put a bid out for Australia’s largest casino operator, and subsequently revoked the deal the next day. The move is not uncharacteristic of the company, which has been dancing with potential merger partners for years. 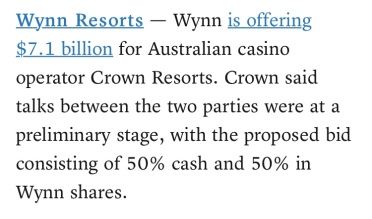 Bank of America raised their minimum wage to $20/hour this week in a move that will likely lead other big banks to follow. 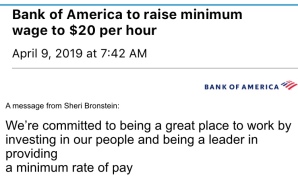 Bloomberg pointed out that Alexa was being used to spy on unsuspecting users by Amazon employees. Read about the creepiness here

Congratulations Virginia. The number one seeded Cavaliers, who embarrassingly were ousted by a sixteen seed in the first round last year beat Texas Tech in overtime … or so I saw. Look, Phil Your Day resides in NYC, and tip off was 9:20PM on a Monday. NCAA and their college sponsors clearly cater to the college student market for viewership.

This tournament will be remembered by the insanely close calls Virginia had.

The best finale in all of professional sports – PLAYOFF HOCKEY has graced us once again. 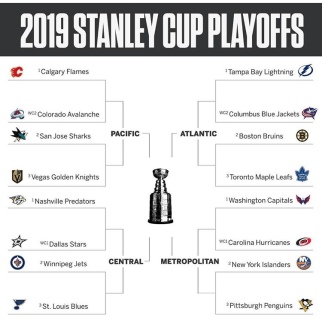 Last year’s champ, and runner up have favorable draws to at least return to their Conference Championship round. Expect Vegas and D.C. to at least be two of the final four teams remaining. The Lightning won 62 regular season games, which is a historical number for those of you unfamiliar with the thrilling regular season. They are the favorites, and for all the right reasons. However, hockey playoffs are historically the most unpredictable. Tampa Bay is already down 0-2 in their series!

We are only three weeks into the baseball season that will last until NOVEMBER, but we may have already been graced with the picture of the year. Yasiel Puig, remember him? Well, he isn’t a Dodger anymore. He is with the Reds according to the picture, but he didn’t leave his attitude in LA. Puig attempted to take on the entire Pirates team in a picture worthy of placement in the Louvre.

Kyle Korver is a popular and successful white player in the NBA and has been for many seasons. He decided to speak on behalf of the entire white population and express a need for whites to do more when acting on race relations with black people. 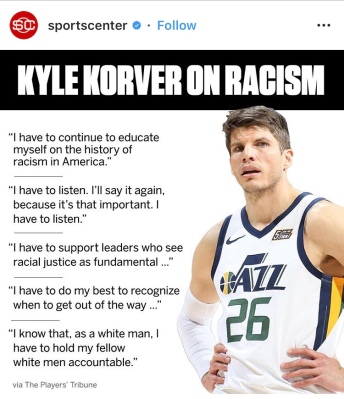 and (almost) Miami Heat lifer Dwayne Wade both left the NBA this week for good. 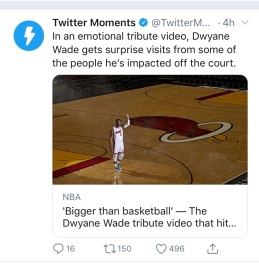 Both legends were simply incredible in their respective roles, and did tremendous work for their franchises and communities. Both brought home championships for their teams. Wade was always destined to be a star, going back to his college days, whereas Dirk shocked everyone. The NBA will miss their presence.

Magic shocked everyone in the sports world when he abruptly left the Lakers. After a game this week he held an impromptu hour-long press conference in which he explained why he was leaving the role. No one saw this coming. 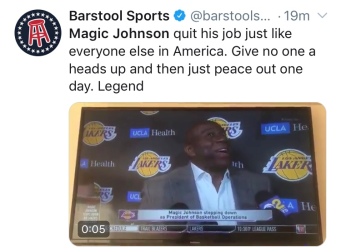 The stage is set for the NBA playoffs. While the Golden State Warriors will likely sweep the Clippers in the first round, they have a huge (potential) task in the second round against last year’s Western Conference runner up, the Houston Rockets. Portland on the other hand has a relatively simply path to the Conference Championship, and may give Houston or Golden State a serious run for their money. The East is up for the taking amongst the top four teams. You can make a case for Milwaukee, Philly, Toronto, or Boston. Give the edge to Toronto considering they have the most experience and the best health.

Chris Davis went on a streak of epic proportions. The player went 0-54 at the plate, before the struggles came to an end yesterday. It is simply incredible. It was beginning to look like he wouldn’t get a hit before a Brexit deal was brokered.

For quite a while, the headlines have shown that Israel’s leader, Benjamin Netanyahu has been embattled in corruption charges. Apparently his supporters don’t care, or there just hasn’t actually been any ‘collusion’ in Israel, either. Netanyahu won the election. Review the potential direction her takes Israel here.

The world came together and we were able to actually see a real life black hole. You have to spend two minutes and watch this video to understand the mastery behind the process. It is incredible.1

This week in Brexit news = no deal. Shocker, right? The EU granted the Brits until the end of October to come up with a resolution to leave the EU.

After seven years in the Ecuadorian Embassy, the Wikileaks founder was finally arrested. UK authorities removed Assange and he faces extradition to the US. He will be brought up on only one charge – conspiracy to hack a US Government computer and faces five years in prison. 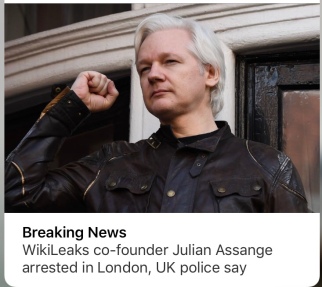 Medicine continues to amaze. This week, we found out a Cancer Vaccine has shown promise in human trials of lymphoma patients. Read up on what this means here.

A rare April storm walloped Denver and the Midwest this week. Denver went from over 70 degrees to nearly ten inches of snow, as snow blanketed the entire Midwest again. It has been a brutal winter for these folks, and snow melt will only worsen the situation when it comes to flooding concerns.

If you like being a little sad, take a look at these forty ‘stats.’ It is a pretty sad list of numbers showing America has begun to throw religion to the curb and we are paying the price. 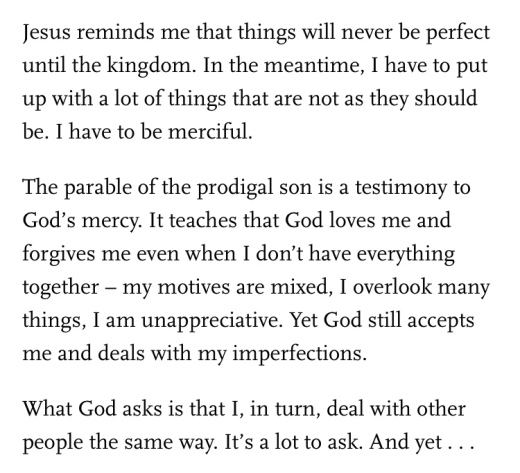